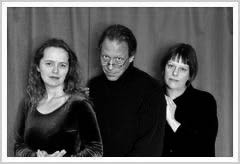 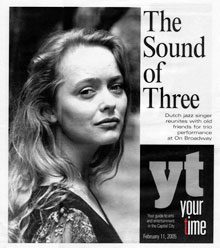 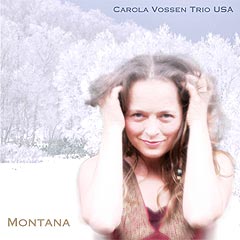 A few words from Kelly:
I first met Carola Vossen a decade ago at a vocal workshop in Paris. She boldly approached me and stated that she wanted to perform with me. Well, needless to say we became fast friends, musically and personally. I returned to the U.S. and sadly we lost track of one another for 9 years. In late 2004 Carola came to mind, I "Googled" her, lo and behold there she was, still singing. I sent an e-mail to a website she was listed on and immediately received information on how to contact my old friend. The reconnection was marvelous and I planned expeditiously to bring her to the States for a few gigs with the wonderful pianist Ann Tappan and myself. Carola arrived and the magic began. Her incredible, warm nature immediately won the hearts of every audience she faced. She sold out every show and people fell absolutely in love with her and her approach to the music. Audiences were also taken by her command of different languages in the music. We truly wanted to record last year but her stay in the U.S. came to an end before we could get it done. Carola came back to perform with us again this year (winter, 2006) and once again the magical connection began with both Ann and I, and the audiences. Carola is an exuberant soul with and abundance of natural musical energy. This year we did get the opportunity to record a "demo" CD and the trio feels it is an honest sound picture of what we do, albeit not complete. I truly hope you enjoy the music!

Kelly Roberti is a world-acclaimed musician and composer from Bozeman, Montana. His musical roots reach back over forty-five years to a childhood steeped in all genres by a family of music teachers and performers. 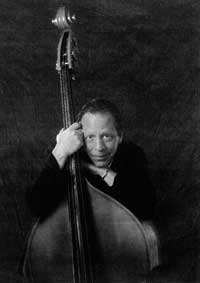 At the age of eleven he played his first gig. In the years since then his refined technical skills on the bass have translated into original compositions, performances, and workshop/clinics with almost everyone from Arnett Cobb to Peter Gabriel. Roberti's style is a powerful blend of musical passion layered with physical grace and a spiritual edge.


Utilizing innovative techniques which break down traditional barriers yet respect their values and influences, Roberti currently teaches a dozen private students on every instrument, is composing pieces of various influences and is an inventive arranger of popular fare. His compositions reflect everything from Tin Pan Alley to ethnic world music with an awareness of the underlying harmonic and rhythmic structures effecting the listener on multiple levels. Recently Kelly has even taking to vocalizing on performances along with writing lyrics for some of his compositions.


Roberti's prodigious and virtuosic bass performance has been heralded as both tenacious and groundbreaking. He performs in group settings and solo outings. Listeners applaud his playing as “...and original and soulful improviser with chops almost unheard of until now...” St. Louis Post-Dispatch. “...earthy and meticulous bassist whose lines underpin the ensemble with roots and flair... an heir apparent to the late Charles Mingus.” LA Reader. “True music is an undefinable communication,” says Roberti. “It is physics, philosophy, history, and mathematics. Of course it is always about the illusive heart, and can only be what you've lived or dreamed. I want to give to it what I have been given. I want to contribute to the tradition, the true human condition and to the next generation.” Critical and popular response indicate that Roberti is achieving this mission, both for himself and for his audiences. Kelly Roberti has a list of over one hundred and fifty tours with musical giants and legends in jazz, rock, and world music to his credit, along with an impressive array of teaching credentials at many major educational institutes in the U.S. And Europe. He has contributed to forty recordings and is preparing two more as of now. Kelly has performed at nearly every major venue, both clubs and festivals, on five continents.

Ann Tappan grew up in New York where she started playing piano at the age of four. After a brief romance with the folk guitar in her teens and a two-year residence in Europe, she entered Berklee College of Music to study jazz composition and arranging. She returned to New York in the mid-70's and connected with the improvisational avant-garde loft scene.   In 1977 Ann moved to Berkeley, CA, to study with ECM pianist Art Lande and became part of his experimental jazz school, first as a student then as an instructor. During her time in the Bay Area she wrote and arranged for many live and recorded projects and performed with such giants as Eddie Henderson and Joe Henderson.

In 1993 she migrated to Montana where she quickly became a busy performer, private educator, and teacher of the award-winning Bozeman High School Jazz Combo. She was the author and administrator of a 2001 MAC/NEA/Jazz Montana grant, a year-long creative music program linking national and local professional musicians to state-wide audiences and K-12 students.

Since living in Montana she has recorded six CDs with the groups ThreeForm, Springhill and the MJ Williams Trio. She has performed widely in the Northwest, including concerts at the Myrna Loy Center in Helena, Yellowstone Art Museum in Billings, Bumbershoot Arts Festival and Jazz Alley in Seattle, the Jazz Montana Festival, Madison River Music Festival, opening performances for Joan Armatrading and Dave Grusin in Bozeman, and at the 2002 Prague International Jazz Festival in the Czech Republic. She returned to the Czech Republic in October, 2003 and 2005 with Springhill for performances at several International Jazz Festivals in and around Prague.

A third Springhill CD, “Two for Joy”, was released in March, 2005. Ann’s solo playing was featured on a 2005 BlueCoast Records piano sampler CD. She also toured in Montana with NYC vocalist Roseanna Vitro in 2005. In 2005 and 2006 she began a collaboration with vocalist Carola Vossen, from the Netherlands, and bassist Kelly Roberti. They have plans to tour Europe in 2006 and record in 2007.   Ann allows creative expression to span style. She cherishes great melodies and uses space cleverly, creating an open, modern sound.